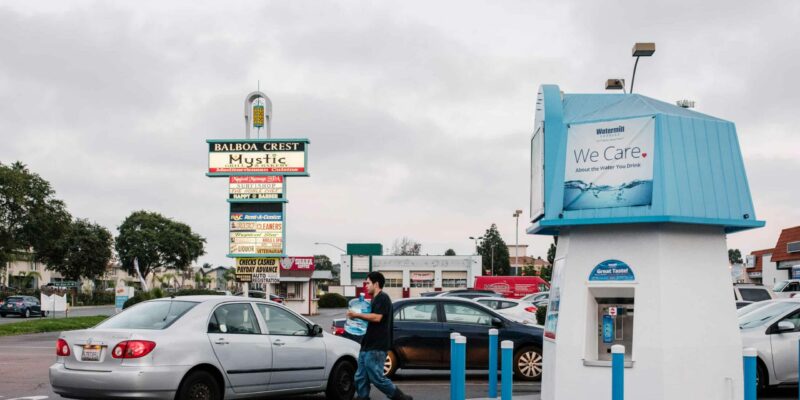 Californians are turning to vending machines for safer water. Are they being swindled?

Customers stream into the parking lot of a San Diego strip mall, lining up behind a windmill-shaped vending machine that fills their jugs for 25 to 35 cents a gallon.

“The water that comes from the tap, I don’t trust it, and it doesn’t taste good,” Miguel Martinez said on a recent afternoon, as he filled his bottle from the kiosk. Martinez lives in San Diego’s nearby Shelltown neighborhood, an area located minutes from downtown where many immigrant families have landed.

Martinez says he doesn’t mind paying a little extra money for what he believes is premium water that tastes better than what comes from his home faucet. It’s a steal compared with the individually sealed bottles you can buy at the store, he said.

“I never drink tap water,” Eddie, a different customer who declined to give his last name, said in Spanish. He got used to buying bottled water 15 years ago when he lived in Mexico and never went back to tap water.

Eddie, who works in construction, said when he is at home he drinks sealed water bottles he buys from the store, but he keeps the three-gallon jugs he fills up at the kiosks when he goes to work.