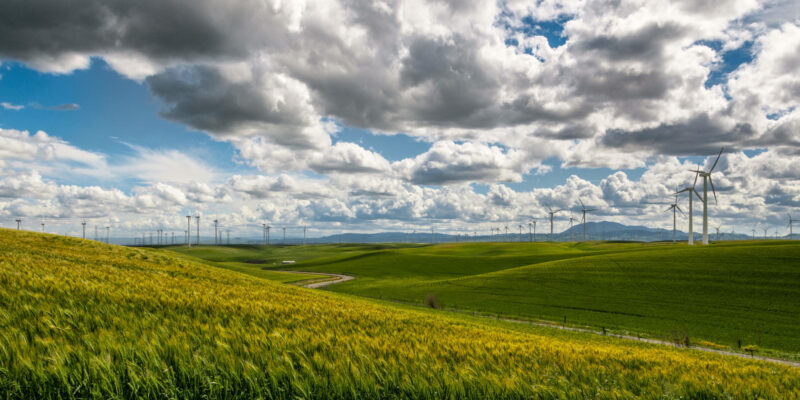 The Power of Wind

During a time when the agricultural sector is rapidly changing, wind energy has proved to be a lifesaver for small, low-income farmers who are trying to make a living and hold onto their land. Federal tax credits for wind turbines and earnings from leasing the turbines allow farmers to make additional revenue to supplement their farms.

More on the future of wind power and its impact on farming:

Wind energy, the fastest-growing source of electricity in the U.S., is transforming low-income rural areas in ways not seen since the federal government gave land to homesteaders 150 years ago. As commodity prices threaten to reach decade lows and farmers struggle to meet debt payments, wind has become the newest cash crop, saving family farms across a wide swath of the heartland.

The money Richard Wilson earns from leasing his land for about 35 turbines run by the Golden West Wind Energy Center outside Colorado Springs has kept him from having to sell off pieces of the 6,000-acre cattle and wheat ranch his family has owned since 1948. “We weren’t making enough money to sustain ourselves,” he says. “Now we’re in a position where we can operate our farm for another generation at least.”

The more than $100 billion that companies have invested in wind power in low-income counties—where about 70 percent of wind farms are located—has helped double assessed land values in some of the poorest parts of rural America. That’s provided a much-needed infusion of local tax revenue that’s being used to rebuild schools and pay down debt.

A five-year extension of a federal tax credit on wind production, passed at the end of last year, should accelerate the construction of turbines. The credit pays wind power producers 2.3¢ for every kilowatt-hour of electricity generated for a 10-year period. That incentive should help double U.S. wind power capacity to 167 gigawatts—enough to power 50 million homes—by 2030, according to Bloomberg New Energy Finance.

By 2030 rural landowners are projected to reap as much as $900 million a year by leasing land to wind developers, says Alex Morgan, North American wind energy analyst at BNEF.

Wind is also keeping power prices low across much of rural America. In the 11 states that produce more than 7 percent of their power from wind, electricity prices fell 0.37 percent from 2008 to 2013; nationwide, power prices were up 7.7 percent during that period.