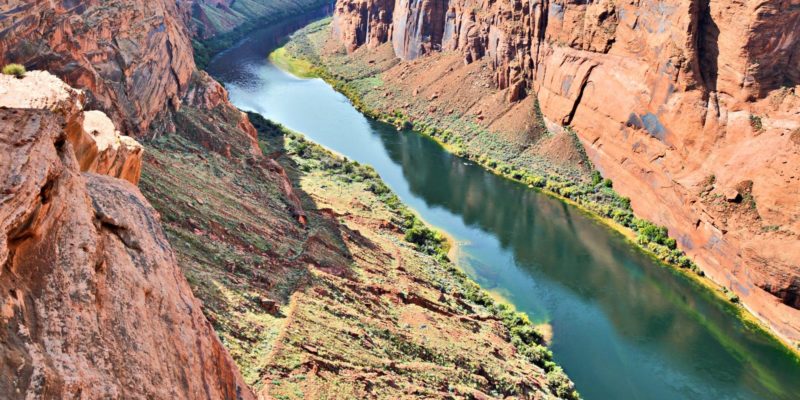 Struggle Over Water From Colorado River Is Getting Worse

Don't be duped by the wet winter

The Colorado River supplies water to seven states, covering cities like Los Angeles, San Diego, Phoenix and other metropolises. But this crucial water source is under threat for a number of reasons including overuse, droughts and climate change. With the recent drought, billed as the worst in modern history, plans have been brewing to deal with a shortage of water from the river. Yet as the 2016-2017 winter turned out to be a wet one, some officials worry this could dampen negotiations. Arizona, California, Colorado, Nevada, New Mexico, Utah and Wyoming have all been working on a drought contingency plan for years, but haven’t been able to nail down an agreement. If implemented, the plan would add voluntary conservation measures that would hopefully keep the Colorado River from reaching dangerous levels of undersupply.

There’s more than just droughts to worry about, however. In a recent study published in “Water Resources Research,” scientists warned that climate change was a factor that policy makers were not taking seriously enough. Rising temperatures caused by global warming accounted for perhaps half the loss of water flow in the Colorado River over the past several years and the effect is expected to continue. The research was based on the river conditions between the years 2000 and 2014 during which the body of water’s average flow decreased by a whopping 19 percent.

Los Angeles Times journalist William Yardley also highlighted the fact that the Colorado River always runs at what’s called a “structural deficit.” This means that the amount of water that cities, tribes and others have legal rights to is always higher than the river’s average flow. Thus, conservation measures are absolutely crucial, no matter how good things look at the moment compared to the past drought-stricken years. With climate change expected to worsen conditions in the Colorado River basin area, all of us, especially our legislators, have to take action and plan for a significantly different future when it comes to water.