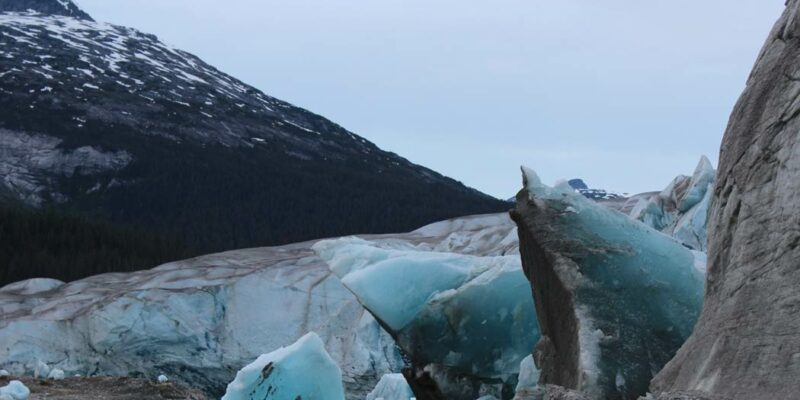 The Taku Glacier is the largest outlet glacier of the Juneau Icefield in Alaska.  Taku Glacier began to advance in the mid-19th century and this continued throughout the 20th century. At first observation in the 19th century the glacier was calving in deep water in a fjord.   It advanced 5.3 km between 1890 and 1948 moving out of the fjord into the Taku River valley, see maps below (Pelto and Miller, 1990).  At this time calving ceased resulting in positive mass balance without the calving losses.  The glacier continued to advance 2.0 km from 1948-2013 (Pelto, 2017). The advance was paralleled by its distributary terminus, Hole in the Wall Glacier.  This advance is part of the tidewater glacier cycle (Post and Motyka, 1995), updated model by Brinkerhoff et al (2017)  .  At the minimum extent after a period of retreat the calving front typically ends at a point of constriction in fjord width and or depth that limits calving.  With time sedimentation in front of the glacier reduces water depth and calving rate, allowing the glacier to begin to advance. In the case of the Taku Glacier after a century of advance the glacier had developed a substantial proglacial outwash and moraine complex that had filled in the fjord and the glacier was no longer calving, images below from 1961 and 1981 illustrate this.  This allowed the advance to continue through the rest of the 20th century and into the 21st century.  The slowing of the advance in the latter half of the 20th century has been attributed to the impedance of the terminus outwash plain shoal (Post and Motyka, 1995; Pelto and Miller, 1990). There is a concave feature near the terminus with an increase in crevassing where the push impacts flow dynamics as seen at black arrow in 1975 and 1998 images below. In 1980’s the Taku Glacier’s accumulation area ratio was still strong enough for Pelto and Miller (1990) to conclude that the Taku Glacier would continue to advance for the remaining decade of the 20th century, which it did.