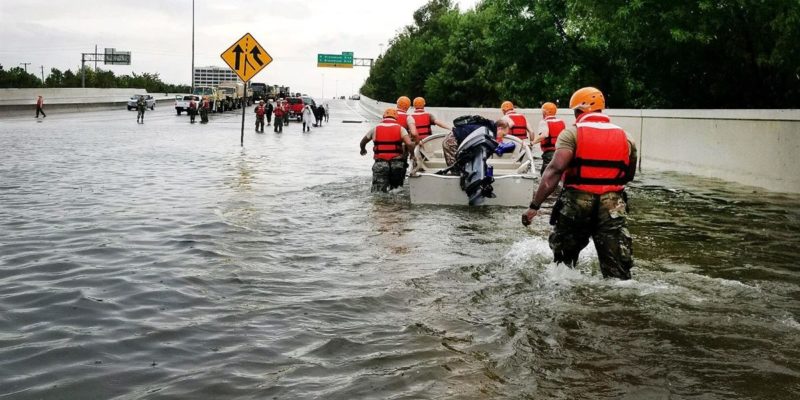 From more flooding to stronger winds

Hurricane Harvey has already caused record flooding in Texas, and its rainfall and damage continue. The intensity of the storm can be attributed to climate change, as higher sea levels and warmer temperatures (which lead to more moisture in the atmosphere) have made Harvey much stronger than it would have been otherwise.

Climatologist Michael E Mann discusses the impact of climate change on storms in The Guardian:

Sea level rise attributable to climate change – some of which is due to coastal subsidence caused by human disturbance such as oil drilling – is more than half a foot (15cm) over the past few decades (see here for a decent discussion). That means the storm surge was half a foot higher than it would have been just decades ago, meaning far more flooding and destruction.

There is a simple thermodynamic relationship known as the Clausius-Clapeyron equation that tells us there is a roughly 3% increase in average atmospheric moisture content for each 0.5C of warming. Sea surface temperatures in the area where Harvey intensified were 0.5-1C warmer than current-day average temperatures, which translates to 1-1.5C warmer than “average” temperatures a few decades ago. That means 3-5% more moisture in the atmosphere.

That large amount of moisture creates the potential for much greater rainfalls and greater flooding. The combination of coastal flooding and heavy rainfall is responsible for the devastating flooding that Houston is experiencing.