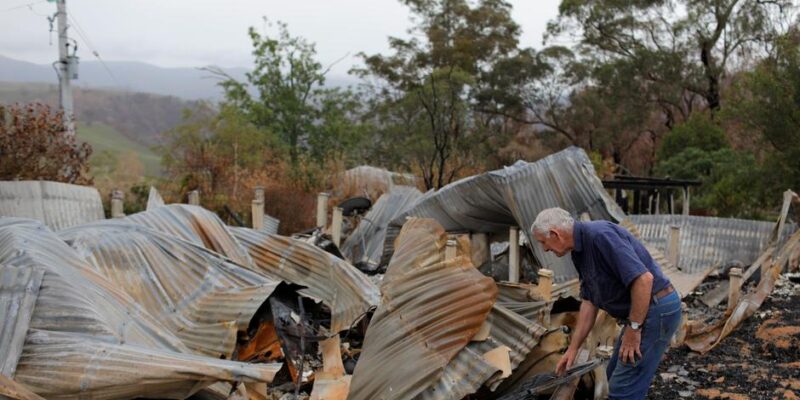 Returning from a morning feeding his sheep, Jeff McCole, a 70-year-old farmer, paused to take in the bittersweet scene – a few droplets of rain falling onto the remains of his fire-ravaged home.

“Nothing like the sound of rain on a tin roof,” he said, as he scanned the residue of a lifetime of memories scattered before him.

By the old front door was a charred metal toy truck his grandchildren once raced down the verandah. Under the remains of the tin roof, a collection of books, his wife’s “pride and joy”, had been reduced to layers of feathery ash. And out back, the skeleton of a Valencia orange tree, planted by his mother 65 years ago, was now laden with baubles of charcoaled fruit.

Seasonal bushfires have struck Australia in a way like never before, making for months of monster blazes and toxic haze, and fuelling a polarizing debate over climate change.

But in Buchan, a conservative-voting farming town in Victoria state that is home to the McCole farm, most locals said they believed the catastrophic fires had nothing to do with global warming.