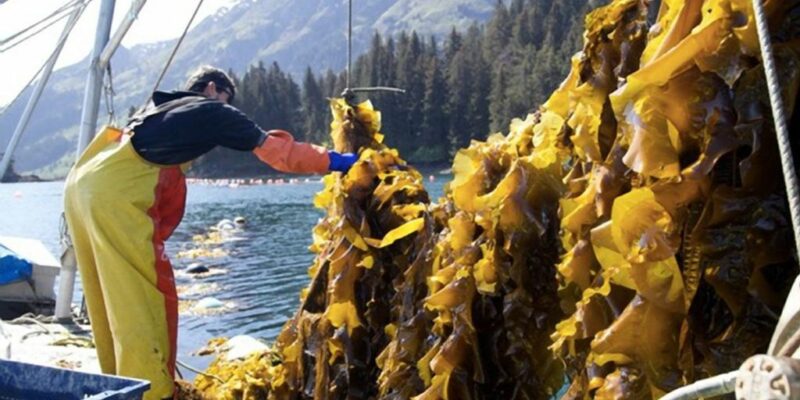 A Different Kind of Weed

Interest in growing seaweeds in Alaska is gaining momentum

Weed is set to give a big boost to Alaska’s blue economy.

The interest in growing seaweeds in Alaska is gaining momentum, and training more farmers is the goal of a program starting next February in Kodiak, Sitka and Ketchikan.

The training is phase two of the 2014 Alaska Mariculture Initiative that aims to grow a $100 million industry in 20 years.

“We’re doing this training because there is immense interest from coastal communities and commercial fishermen,” said Riley Smith, development director with the Alaska Fisheries Development Foundation, which helped spearhead the mariculture push.

The training program is funded by a $288,000 grant by the federal Saltonstall-Kennedy program for two years. Alaska’s first kelp farm permits were issued in 2016 at Kodiak, and now 21 growers have added dulce, nori and sea lettuce to their macroalgae startup menus. The fledgling kelp harvest has gone from 16,000 pounds in 2017 to nearly 90,000 pounds last year, nearly all from Kodiak. Growers were paid 45 cents a pound for sugar kelp and 90 cents for ribbon kelp for crops with a six-month turnover.

Through 2019, Alaskans have applied for over 2,000 acres of new or expanding undersea farms, double the footprint from two years ago, according to Cynthia-Pring Ham, aquatic farming coordinator at the Alaska Department of Fish and Game, which issues the permits. Fish and Game partners with the Department of Natural Resources, which leases the lands where aquatic farming takes place.